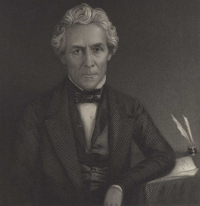 John Bouvier (1787-1851) was a Philadelphia lawyer, recorder, and criminal court judge. He is most remembered for his legal dictionary, believed to be the first legal dictionary based on American law.

Bouvier emigrated to America from the South of France with his family in 1802 at age fifteen. His early career was spent as a printer and bookseller, but he later transitioned into the practice of law. Before applying for admission to practice as an attorney, Bouvier became a student of Andrew Stewart, a Representative of Pennsylvania for the 13th, 14th, 18th, and 20th Congresses. In 1818 Bouvier was admitted to practice in Fayette County, and in 1822 he was admitted to practice as an attorney of the Supreme Court of Pennsylvania. His legal career included a stint as the Recorder of the City of Philadelphia from 1836 to 1838. He was then appointed Associate Judge of the Court of Criminal Sessions in Philadelphia. Bouvier died on November 18, 1851, and his remains can be found at Laurel Hill Cemetery.

Bouvier's most famous contribution to the legal profession is his dictionary. As he studied law, Bouvier struggled with the legal dictionaries of the time that focused on British laws. In the Preface to his 1839 A Law Dictionary, Bouvier says the British law dictionaries "were written for another country possessing laws different from our own. . . . And there is a great portion which, though useful to an English lawyer, is almost useless to the American student". Bouvier believed his dictionary "written entirely anew, and calculated to remedy those defects, would be useful to the profession". Bouvier's thoughts on his dictionary were correct. Bouvier published three editions of his dictionary in his lifetime, and the fourth edition was based on notes prepared by Bouvier before his death. Bouvier's Dictionary continues to be published today: the latest edition was published in 2012 by Wolters Kluwer.

Though he is most known for his dictionary, Bouvier also edited the 1842-1846 edition of Bacon's Abridgement, where he added American cases to the annotated encyclopedia of the law, and shortly before his death in 1851 he published the Institutes of American Law, a four volume treatise where he details various legal principles, including bailment, contracts, and property.

Jenkins' Portrait Gallery includes a painting of Bouvier attributed to T.B. Walsh, who is also credited for engravings of Benjamin Franklin and the Captains Creighton, Low, and Stouffer Life Saving Medal. His portrait is on display in the hallway leading from the Circulation Desk to the Pennsylvania Collection.

In addition to Bouvier's portrait, Jenkins' Rare Book Collection includes early editions of his dictionary, including the first edition from 1839, his edition of Bacon's Abridgement, and the second edition of the Institutes of American Law. A short biography of Bouvier is also included in Henry Simpson's The Lives of Eminent Philadelphians, Now Deceased (1859).

For help searching the above sources for John Bouvier, or other historical Philadelphia lawyers, contact our Reference Librarians at 215.574.1505, research@jenkinslaw.org, or chat with us.

This is no April Fool's joke! The Oxford English Dictionary is now available to all Jenkins' members. Find the meaning and history of phrases like, " April fool " which originated in the 17th century, or a modern phrase such as " cloud computing ."
Jenkins' Historical Collection
July 23, 2015