The Pennsylvania lawyer John Bannister Gibson (1780-1853) was elected to the Pennsylvania House of Representatives, appointed president judge of the 11th Judicial District, and held positions as the Associate Justice and Chief Justice of the Pennsylvania Supreme Court. He was also an enthusiastic hobbyist. Jenkins' Portrait Gallery includes a painting of Gibson attributed to Jacob Eichholtz, which is located near the center of the reference wall and a bust in his likeness also resides in the cafe.

John Bannister Gibson was born on November 8, 1780 in what is now Perry County, Pennsylvania. His father, Colonel George Gibson, served in the Revolutionary War and was later killed while commanding a regiment at St. Clair's Defeat in 1791. John was 11 when his father passed. Mrs. Anne West Gibson was left to raise four sons in poverty after the death of her husband. John's poem Retrospection (as published here describes his bittersweet memories upon revisiting his childhood home.

Gibson attended Dickinson Grammar School and Dickinson College before studying the law under Judge Thomas Duncan in Carlisle, with whom he later served on the PA Supreme Court. The legal profession then largely revolved around special pleadings and real estate, and was beginning to focus on mercantile law. As of 1800, the only Pennsylvania law books that had been published were three volumes of Dallas’ reports, which Gibson studied alongside English common law. He was admitted to the Bar of Cumberland County on March 8, 1803 and practiced for some time in Pennsylvania and Maryland before settling in Carlisle. From 1791-1806, Pennsylvania was comprised of only five judicial districts, so practicing lawyers traveled widely on horseback with a collection of law books. As a young lawyer, Gibson appeared before the Pennsylvania Supreme Court three times: Commonwealth v. Crevor, 3 Binney 121 (1810); Commonwealth v. Blaine, 4 Binney 186 (1811); and Commonwealth v. Harkness, 4 Binney 194 (1811). These opinions are available at Jenkins in the Pennsylvania and Rare Books print collections, on microform, and through HeinOnline and LLMC Digital.

Gibson was elected to the Pennsylvania House of Representatives in 1810. He served two terms, during which he acted as Chairman of the Judiciary Committee, proposed a successful bill to abolish joint tenancy (Act of March 31, 1812, ch. 194, 1811 Pa. Laws 259), and was appointed to a committee to consider impeachment of Judge Thomas Cooper. Gibson took a stand against the impeachment because he did not think the proceedings were fair. Although his efforts were unsuccessful, the two men enjoyed an enduring friendship thereafter.

In 1813 Governor Snyder appointed Gibson to the position of President Judge of the 11th Judicial District, which included Tioga, Bradford, Susquehanna, and Luzerne counties. After three years Governor Snyder appointed him to Associate Judge of the Pennsylvania Supreme Court. Upon the death of Chief Justice Tilghman in 1827, Gibson was appointed to Chief Justice by Judge Tod. A constitutional amendment in 1838 set judicial tenure to a term of 15 years instead of life, and required the terms of judges then in office to expire every three years in order of seniority. Gibson opposed the amendment. He resigned as Chief Justice and was re-appointed by Governor Ritner, thus prolonging his term by several years. A subsequent constitutional amendment in 1850 required Pennsylvania Supreme Court judges to be elected by popular vote instead of appointed by the Governor. In 1851 Justice Gibson was the only member of the then-existing court to be elected. He was 70 years old. The judges drew lots for terms, and Jeremiah Black took over as Chief Justice. All told, Justice Gibson was a member of the Pennsylvania Supreme Court for 37 years and held the Chief Justice position for a quarter of a century.

When crafting judicial opinions, Gibson was a clear, concise writer, preferring to emphasize the general intent of laws rather than argue semantics or specifics. Some of his notable opinions are excerpted and summarized in An Essay on the Life, Character & Writings of John B. Gibson, L.L.D. by William A. Porter. The full-text of published opinions written by Gibson may be found in Jenkins' print collections and member databases, including HeinOnline's World Trials Library. Our reference librarians can help locate specific opinions.

Justice Gibson cut an imposing figure: "His stature was three inches above six feet; he was powerfully built, well proportioned, and of vigorous health. His head was larger than Webster's; his eyes were keen and penetrating; his mouth and chin were strong and determined. His bearing was habitually dignified, his manner often abstracted, the weighty problems occupying his mind making him at times even oblivious to acquaintances met on the street." (Samuel Dreher Matlack, Great American Lawyers: The Lives and Influence of and Lawyers Who Have Acquired Permanent National Reputation, and Have Developed the Jurisprudence of the United States: a History of the Legal Profession in America William Lewis ed., Vol. 3, p. 366. Also available on HeinOnline.) Biographers have made particular note of his unusually large head, which he opted to shave and cover with a wig for comfort. According to Judge Black, "he considered hair simply an overcoat for the head, and would not be bothered with a garment which he could not remove at will." (Memoirs of John Bannister Gibson by Thomas P. Roberts, p. 80.)

His personal interests extended far beyond the practice of law. During his time on the Pennsylvania Supreme Court, he also served as a Deputy Grand Master (1821-22) and Grand Master of Masons (1823) and belonged to various Masonic lodges in Lancaster and Wilkes-Barre. A skilled artist, writer, and musician, Gibson sometimes quoted Shakespeare in his opinions and was rumored to have played violin in his law office. He read French and Italian, was a self-taught oil painter and piano tuner, and maintained a garden with fruit trees at his home in Carlisle. In his youth he enjoyed painting portraits and historical scenes, and his last known painting was a self-portrait around the age of 21 or 22 (reprinted in Memoirs of John Bannister Gibson by Thomas P. Roberts, p. 64). His artistic inclinations nevertheless emerged throughout his career in the courts, where he was known to sketch caricatures during trials for the amusement of other judges.

If not for becoming a lawyer, Gibson may have pursued a successful career in medicine. Physicians sometimes consulted him on difficult diagnoses, and he also dabbled in dentistry. Most notably, he used a dentist's tools to fashion a plate for his own teeth when they became loose. The dentist, Dr. George Hendel, was impressed by the workmanship, and Gibson later procured a complete set of dental tools in order to create fillings for various animals and some of Dr. Hendel's human patients.

Although Gibson frequently entertained at his home in Carlisle, he had no talent for recalling names and faces of acquaintances. He was, however, a family man. His marriage to Sarah Work Galbraith took place in Carlisle on October 8, 1812. The couple had eight children, five of whom reached adulthood. When one of their daughters was later widowed, the Gibsons opened their home and helped raise her young children.

At the age of 72, Justice Gibson visited Philadelphia to attend a meeting of the court. He took ill and died there on May 3, 1853, surrounded by his family at the United States Hotel on Chestnut Street between Fifth and Sixth Streets. He was buried in Carlisle. John Bannister Gibson was survived by his brother, General George Gibson, his wife Sarah, and their five children. 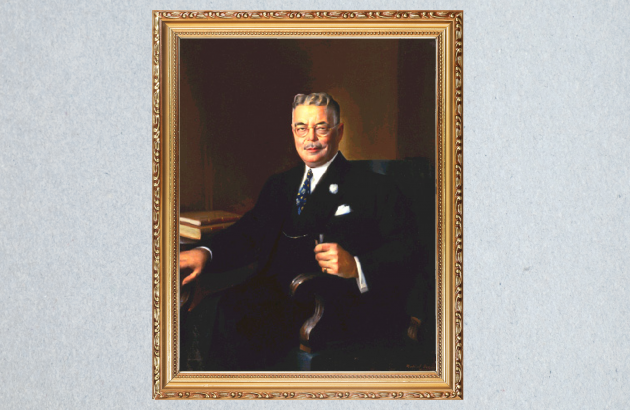 Frederick Carroll Brewster (1825-1898) was a Philadelphia lawyer, City Solicitor, Court of Common Pleas judge, and Pennsylvania Attorney General. He authored a number of books, many of which are in the Jenkins Law Library collection . Jenkins’ Portrait Gallery includes two paintings of Brewster...